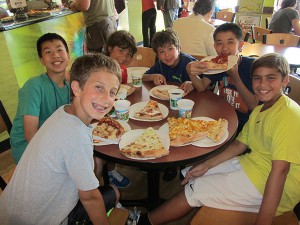 For the past two years SGHY has allowed two students from each school (MS 302 and MS 126) to attend a one-week session at the Julian Krinsky Tennis Camp, one of the nation’s premier tennis programs for young people.  The Krinsky organization generously accommodated two campers for the tuition of one.  In addition to new tennis skills, new friends, and lots of fun, these middle-school campers also derive inspiration from living on the Haverford College campus. 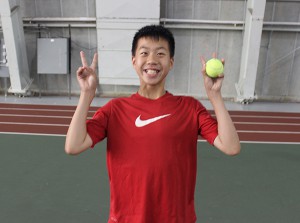 The first day, oh I remember, I just get out of the van and I get treated so nicely. There was a guy and he took our luggage and brought it to our room.  Wow! I dropped off my stuff in my room and didn’t bother to unpack I just ran out and was like “hello everybody”.  I had dinner and that’s how I ended my first day.

My second day, I’ll always remember this day because I met a guy named Roger. He was an inspiring person. He helped me a lot in tennis, I never thought I could make it this far in tennis but I did. I know that Roger will not always be there to coach me but I will always have him in my heart because he is my inspiration to tennis.

Last of all I would like to thank the people who made this possible and my biggest thanks of all goes to my family/my coaches/supporters.
Anthony Li 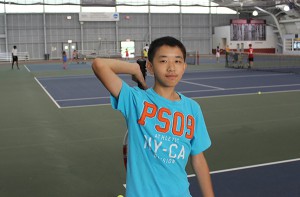 I enjoyed going to camp. I met new friends and the food was delicious. After dinner my friends and I went to the movie theater, the mall, bowling, and many more. I made new friends
like Chase, Yun, and more.

We played tennis for 8 hours. It was tiring, but it was fun and every day we are getting better and better at tennis.  I hope that next year I could go back to camp and play more tennis, so I can be a better tennis player.  I wish to see those friends that I met at camp again next year. I think in my mind that it will be cool to have three people going instead of two, but it’s ok. I just think that it will be awesome to go back next year.
Callahan Loo