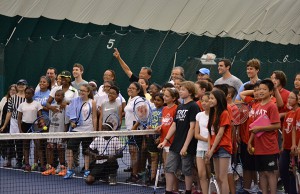 The First Annual Sophie Gerson Cup between MS 302 from The Bronx and MS 126 from the Lower East Side/Chinatown in Manhattan – unbelievable !

At the first annual Sophie Gerson Tennis Cup, our middle school tennis players were thrilled to play on the home courts of Columbia’s Ivy League Champion Men’s and Women’s Tennis Teams. The experience was heightened by the surprise visit from champion coach Howie Edelman and two of his star players, Max Schnur and Bert Vancura.  At the end Coach Edelman and his players took time to answer very thoughtful questions from the students.  The Coach, Max and Bert left with a bunch of new enthusiastic fans! And, our young players were left not only to dream about tennis but also about college! 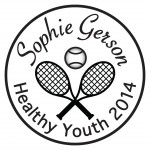 You can see the the action here.

And then there are the quotes:

Thank you for bringing the game of tennis to our school.  I really learned a lot.  Thank you so much for the tennis rackets and the tournament that you set up at Columbia University.
Melike Gulley

The culminating event at Columbia went extremely well. From the smoothly executed competition to the food fest to the presence of Howie Endelman and two of his Columbia Men’s Tennis Team players. A standout part of the day was when one student from each school was selected to partner up with the Columbia players in a friendly doubles competition.  All of the students loudly cheered their teammates on.  Another highlight was when coach Endelman and his players spoke to the audience about Columbia and the importance of getting a college education. It was an impactful moment not only for the students but for their parents as well.

At the end of the program, the culminating event that Columbia University hosted was so exciting for the players. They had the opportunity to play matches against another school and use all the skills and rules they learned and apply it in a competitive environment. The tournament was very well run and the players felt so special. they got to meet the collegiate players and meet the Columbia coach.  They were so inspired and at the end of the day left with medals, a feeling of accomplishment and a yearning to play more so they can one day play like the Columbia tennis players. The students cannot wait for the spring so they can start training again to win the school championships at the culminating tennis tournament!
Sabine Kullman, Teacher and MS 126 Tennis Coach